The first paper will be based upon a literature review, where I will make use of various sources on service-oriented architecture. SOA was on the pinnacle on the hype cycle a few years ago, but it has changed since and to some extent it has proven to be an architectural pattern that can be used efficiently when using organisational and in particular technical matters. In recent times the concept of micro-services has attracted a lot of attention by consultancies and conferences e.g. GOTO Copenhagen among others.

Also, I have been thinking about writing a paper regarding the implementation of a service-oriented architecture. This particular paper will be based on participatory observations.

Please let me know, if you find these to papers interesting. I can be contacted at:

I have an idea to write  a conceptual paper on how an organization can make use of Enterprise Architecture Program (EAP) to ensure a better development and a more cost efficient approach to maintenance of the organization’s application portfolio.

I have chosen to write a draft for a paper dealing with the idea an concept of open source enterprise architecture.

While I am dealing with these five concepts I will applying the hermeneutical circle. The hermeneutical is based upon the idea that the analyst would have to deal with his own hypothesis and assumptions on what the theory and texts deals with, but he should deal with the meaning of the sections of each of the selected texts and for that matter deal with the meaning of the whole texts in their context (time, culture, and history)

The analyst can go on, when he has an idea on the quality of the out come (analysis) e.g. if it is mature enough to go for making conclusions.

The approach has been illustrated below. 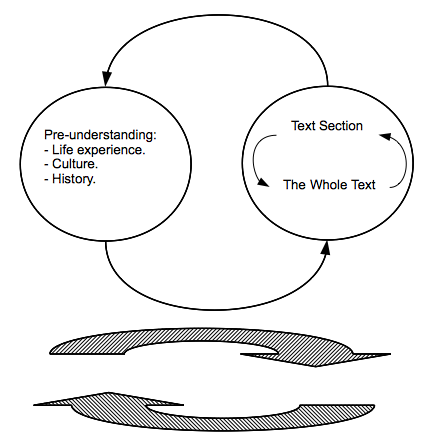